I wish we had the horror channel, we've got syfy and that is pure shite
Top

The Horror Channel is really good.
I think it's one of the free channels on Sky. You can also get it on Virgin and FreeSat.
They're currently showing Twin Peaks from start to finish too, every week night.

I fancy these next week:

2005 , Certificate 15
Sensational sci-fi horror. When a deadly extraterrestrial lands in an Arizona mining town, a gang of escaped death row inmates and a hard-as-nails soldier join forces to defeat the alien attacker


Happy Birthday To Me

1981 , Certificate 18
Gruesome slasher starring Glenn Ford. The members of an elite high school clique become the target of a deranged killer who uses all manner of implements to cause carnage, including a shish kebab!

Which in no way can be terrible.


Still haven't watched Wrestlemaniac, although I have got it Sky+'ed for later.
I'll let you know how terrible it is.
Top

'happy birthday to me' had a great and particularly memorable poster: 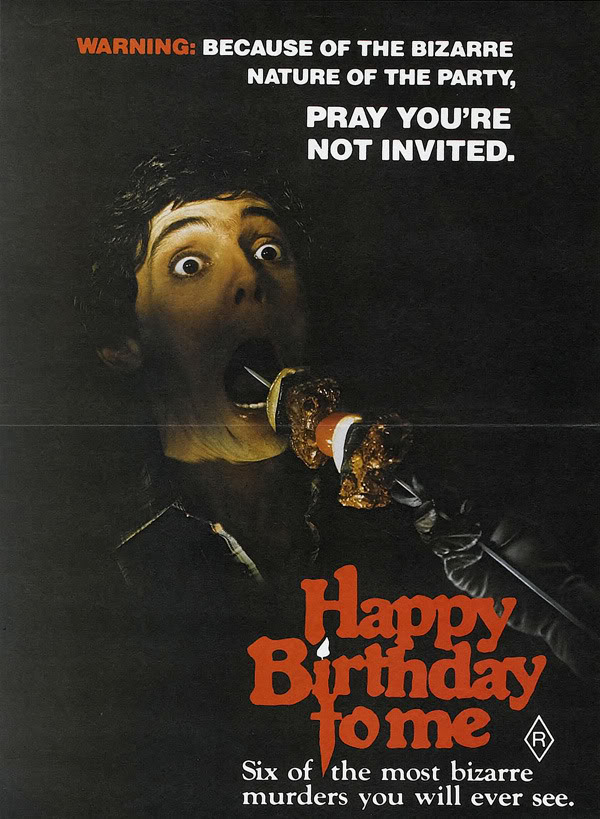 it's star is laura ingells big sister from little house on the prairie, the one who went blind (on the prairie)

*must get the horror channel*
Top

just watched the final episode of series one of 'the walking dead' on channel 5, I appreciate that makes me well behind all the young people with their torrents and FX channels and whatnot

all in all I enjoyed it, some episodes were better than others- some elements were a bit soapy, the final one was particularly good though or perhaps I was more in the mood, more susceptible than some of the previous week's (I got well facked off with the constant overlong ad breaks on five, watching it on catch up was a definite plus)... I'm looking forward to the second series, I hope lennie james returns and michael 'henry' rooker
andy hart illustration
Top

Just finished watching it right this minute (so I could skip the adverts) and I've been enjoying it too. It can be a bit scary but I'm glad they're not feeling the need to use the zombies all the time.
Top

I've got the last episode to watch (I hate those ads and the 'Rage' sponsorship too) and am really looking forward to it. I've kind of enjoyed the 'soapiness' and that its not been too reliant on gore and horror; I think that makes it all the more exciting or tense when it does kick off.
13 episodes in the next series, so fingers crossed and all that that they can keep it involving and entertaining enough to stick with.
Top

Watched 'Possession' (dir Andrzej Żuławski, 1981) recently...highly recommended, very intense stuff, very strange. A mix of psychosexual drama (has been cited as an influence on 'Antichrist') and some horror elements. Isabelle Adjani is bloody, and bloody amazing in this a fair amount. Very visually striking.

I was just re-reading ben 'breakfast in the ruins' top 15 'orror films... of all time and as a list of fifteen 'orrors go it's pretty hard to beat plus it's a splendid read:

highly recommended to them of that bent

plus it mentions 'possession' which I really should get 'round to watching, when I've got the nerve- it's reputation proceeds it
andy hart illustration
Top

I even enjoy reading reviews of Psychomania.
My apple pies go off today.
Top

it's probably one of the pinnacle achievements of british culture ('psychomania'... oh, ok, and the breakfast in the ruins blog) and yet you carn't get a copy on dvd in the uk unless it's a region 1 copy and you have one of those multi-region dvd players that are only £7 in asda as I'm continually reminded on realdvdenthusiastforum.com whenever I moan about the great region 1/2 divide and when I'm not being trolled by the young people on that board who snigger at us 'physical being' nerds who insist on things being actually real and easy to put on a shelf using whichever filing system we hold dear

'why don't you download it as torrent?' they'll say witheringly, the older ones, 'it'll only take 3 weeks to download and then you'll have an almost watchable version all of your very own on your hard drive minus 20 minutes in the middle for no apparent reason'

and then some of the bigger boys will say, 'fuck all that technology shit, why haven't you got a copy on video from the eighties? the true form that all film should be watched in, ideally on an orange vinyl sofa in a room with brown curtains that are permanently closed as a crying child looks down at you from a mass produced print on the wall and the neighbours next door argue and/or do sex at an ever increasing volume'

by the age I am now my great grandfather was the father of 5 children, had fought in a war, lost a leg and drank himself to death

now that was a life well lived, but I digress

Did you mean region 2?

I recorded it off BBC4 and the quality is very ropey. Word is the region 1 Severin special edition released last year is better, and uncut. The BBC4 screen was probably around 81 mins or thereabouts, this version is 90mins. EDIT: That's lies that is. The BBC version is 90mins as well, so presumably uncut.

I did, but typed region 1 thus rendering my whole post void

I'm going to go back and edit it, meaning that this post and your one before it are confusing to the many generations that will visit this page in the future to see what great works were performed here
andy hart illustration
Top

Have you checked to see if the DVD player you have can be made to play any region? Most of them can fairly simply.
Top

Yeah, we did that to ours before. You have to press buttons on your remote in the menu or something in a particular order (which you can find out how to do on the internets for each DVD player) and HEY PRESTO! Multi-region.
I suggest you ask Hayley to do it because you might get Man Vs Technology rage and launch the remote through the telly.
xx
Top

La-Di-Da wrote:Yeah, we did that to ours before. You have to press buttons on your remote in the menu or something in a particular order (which you can find out how to do on the internets for each DVD player) and HEY PRESTO! Multi-region.
I suggest you ask Hayley to do it because you might get Man Vs Technology rage and launch the remote through the telly.
xx

you know me too well, Man Vs Technology rage is an all too real possibility... if I've ever come across at all 'chippy' on the internet ever it's down to the fact I'm probably sat at a keyboard gnashing my teeth and howling at the complexities of 'electrickery' and 'gizmoloids'

getting the thread back on track I've got 'night of the demon' (aka 'curse of the demon') to watch this weekend, it's in blackened white and from the last century, contains no teenagers and isn't in 3-D but despite that I'm still looking forward to it
andy hart illustration
Top

Night of the demon is SUPERB.

Creepy as hell, absolutely wonderfully acted and the special effects are actually darn good for a film which was made in 1957. Plus Kate Bush sampled the line "It's in the trees, it's coming!" for the beginning of Hounds Of Love so you just know it's going to be good.

it's one of those films I'm not sure if I've seen or not... and it's widely regarded as a classic and I don't think I'm not going to like it

I've got 'vampire circus' coming in the post too, which I know I'll love, I'm trying to convince hayley that she needs to see 'blood on satan's claw', I've not seen it for six months or so and I'm getting withdrawal symptoms (strange patches of fur growing hither and thither, really bushy eyebrows, etc)
andy hart illustration
Top

hey, linus! wrote:it's one of those films I'm not sure if I've seen or not... and it's widely regarded as a classic and I don't think I'm not going to like it

I've got 'vampire circus' coming in the post too, which I know I'll love, I'm trying to convince hayley that she needs to see 'blood on satan's claw', I've not seen it for six months or so and I'm getting withdrawal symptoms (strange patches of fur growing hither and thither, really bushy eyebrows, etc)

Oddly enough it was a toss up between blood on satans claw or harold and maude for me tonight, since I am on my todd.
My apple pies go off today.
Top

Anyone seen Murder Party?
Horror Channel says "Outrageously funny and gruesome scare-fest." but as with most 3am Horror Channel films, it could go either way.
Top

I was quite excited to see a tiny bit in the Metro today where they showed a picture of British road signs being taken down and being replaced with American ones. This is because they are filming World War Z with Glasgow playing the part of Philadelphia!?
I loved the book so much, I really hope they don't make a shit film.
Top
Post Reply
286 posts