what am i missing? whats this about longest set/match ever?
i said OK! the wind said no
Top

It's temporarily over - final set is now longer than any previous match, I think. 59-59, and Mahut decides it's too dark to carry on. Resumes tomorrow, when Isner will probably win two sets to love.
Top

Got to feel for Mahut. Last night Isner looked like he was about to drop dead but Mahut was still moving around okay. 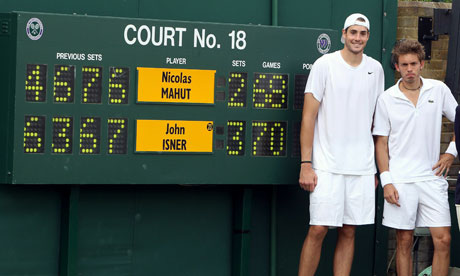 Not a happy bunny!
There ain't no-one gonna turn me round
Top

And guess what Maut did just after this ? He played the double.
Another Sunny Night
Top

Obnoxious Noo Yoiker gets his comeuppance at the US Open.

It looks like several people filmed it and uploaded it to You Tube.
Fuck your tea room.
Top

Well, the Year End Masters takes place in London this Sunday - the second year for this.

Some of it will be on TV - I think that BBC2 will be showing the singles match from the afternoon session on each day of the tournament (it runs for 8 days) - 2pm start - with the opening match being Andy Murray against 2-time French open finalist Robin Soderling.

Well, outside of Wimbledon, in terms of tennis in this country, it has to be more interesting than those abject Davis Cup defeats to the Faroe Islands, or whichever small nation that team GB will lose to next..!
Top

First slam of the season starts this coming Monday - the Australian Open..!

After getting caught up in Australian time with the Ashes, it looks as if I will be doing the same again for this. Yay!!

The bbc is showing the evening session of the tennis every day, starting from 8:30 am, uk time. It will be shown on bbc interactive - the red button and all that. The coverage is usually the Rod Laver arena match(es)..
Top

Just going to dust down this thread. I really should post on it more as I am a bit of a tennis fan - not sure if anyone else on anorak is?

He's got quite an obstacle in the final in the form of world numero uno novak Djokovic - who beat him in the Aussie Open final in January this year.

Novak is looking horribly good - although his semi final with Juan Martin Del Potro took about 5 hours earlier today - and was brutal.

One other factoid. This year Wimbledon finals weekend and Indietracks won't clash. Yay!! Indietracks 2012 was indeed a year ago this very weekend.


Not sure if Andy can win on Sunday. He'll probably have to play lights-out tennis, but who knows on the day, blah blah, etc.
Top

I'm a fan! The 4th set tie-break in the Djokovic match earlier was possibly the best bit of tennis I've ever seen.

I think Murray feasibly could win it, but I don't think he actually will. I think it could be another very close match though...

Also I really want Lisicki to win tomorrow, because she's lovely. She always looks like she's having such a good time playing tennis, unlike a load of those other grumps.
Top

Yeah, that tie break was a corker - especially the first match point that DelPo faced.

I've seen DelPo play live a few times - and when he pulls the trigger on that forehand of his, it is even more impressive in real life.

Agreed about the men's final. Whilst the semi was on Andy's racquet - if he played well then he would win - there is the possibility that he might play well in the final and it might still not be enough. Rafa is like Terminator, but Novak seems like Terminator 2 - you knock him over (like DelPo did) and he still come after you and will not stop until he is done.

On the women's side - yes, it's Lisicki all the way for me too. I'm a bit of a fan of Radwanska and thought their semi should have been the final - but I wanted the winner of that semi to take the title, for sure. Bartoli is quite a wee character though.

In terms of the women's tennis players being grumpy - many are pretty serious, often having to psyche themselves up with incessant fist-punching, 'come on's and lingering looks to their team when things go a bit Pete Tong. Certainyl there was less grunting/ screeching in the semis than usual, and probably will be the same in the final too. I just hope it's not a damp squib.
Top

Who knew I started a tennis thread?!
Top

I think that it started out as a thread about wimbledon only.. then it grew into one about tennis in general (i.e it was renamed)
Top
Post Reply
52 posts