A couple of weeks ago Ralph found my box of Meccano and asked if we could make something with it. We've made a small crane and now are working on a larger one will be about 3-4 foot tall (Ralph likes cranes...). I've not made anything out of Meccano for over 20 years and forgotten how great it is. I was always more into Meccano than Lego.

I used to be a member of the North Midlands Meccano Guild and I've still got a big pile of their magazines. Going through them was quite lovely. Even/especially the one with my Granddad's obituary (who was a really big Meccano fanatic and used to make enormous models - I've still got the Meccano robot he made). Ralph asked me today if he could join and I said that they won't be going any more but I've just googled them and they still exist!
Top

I love Meccano too, tonieee. Screws! We didn't have Lego when I was little and Meccano was massive in France so every year, when we were taken over there on holiday, me, my brother and my cousins used to spend the entire summer building stuff. Can't remember making anything specific though - I must have been an abstract artist. Really fiddly, wasn't it?

I'd love to see that robot your granddad made.
The equation of poetic with administrative talent was often less perfect in practice than in theory
Top

You two must've been tuff kids. Actually, looking at both of you, I can quite imagine that. When I was little, I thought Meccano was for the real big, hard kids who were into diggers and stuff and it frightened the life out of me. I stuck to making jails out of Lego.

I was frightened of Meccano. Jesus.

I'll take a photo of my Granddad's robot when I get chance but it looks a bit like this: 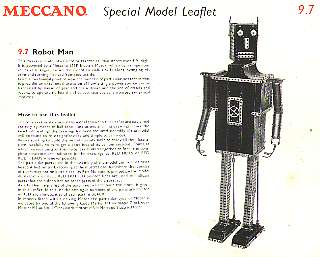 Meccano is really fiddly but that's part of the joy. The instructions don't give full step-by-step instructions on how to make a model like Lego, just a list of parts and a picture of the completed model - some times in two or three bits to make it a bit clearer. I read some where that that was deliberate to make you think more and develop your engineering skills.

The North Midlands Meccano Guild have a meet up every six months on Oxten near Nottingham where people show off their models. The last one was Saturday! I wish I'd known, I could have taken Ralph. The next one is in September and there is one in July in Skegness so I think we'll go along to one of those. You should come along Marianthi.


a layer of chips wrote:When I was little, I thought Meccano was for the real big, hard kids

For me Meccano was about having a lovely time with my Granddad.

I do remember once being sat playing with Meccano by myself and one of my Mum's friends coming round and they were discussing how unusual this was and my Mum saying "well at least it keeps him off the streets". Presumably this is because being from Mansfield I was it was expected that I should be out fighting or setting fire to cars or something...
Top

I just never understood nuts and bolts. Which is why I took a job as a plumber when I was 16.
Fuck your tea room
Top
Post Reply
5 posts • Page 1 of 1