by stolenwine
i don't know if we should just have one thread for all fashion stuff, or if we should break it down, but i'm going to start this thread about shoes.

i love shoes! i want some new boots for the winter that are flat and black and kind of mid-calf and not slouchy. i haven't been able to find those yet.

i also love these cute slingbacks on sale for Ãƒâ€šÃ‚Â£30 at office, although it's probably too cold to wear these without tights right now:

by Sylvie
I think you could wear those with tights - maybe coloured or patterned ones? They are really cute.

I want some black brogue type mary janes with a heel (chunky enough so I don't fall over) and something with a big strap and buckle in a brighter colour. I can picture it in my head!
by let it ride
at the moment i have so many shoes that i don't know if i can justify buying any more... some of them i haven't even broken in yet. but that is the boring bit, breaking them in!

i have bought a pair of flat black boots for winter, but they are vaguely slouchy. i think they look good though. i have riding boots already, that are more strict anyway.

i do want a pair of brown flat boots too though, feminine, not too clunky (i hate the clunky stuff, it makes me feel like a man in a bad way.)

and i think it is great to have different threads for different stuff, since there is a sub-forum for this!

i would guess good ones could be:
clothes
accessories
make-up and cosmetics
(would there be need for a separate one on just skincare or haircare?)
by stolenwine
i hate clunky shoes too for the same reason, astrid! i just can't pull them off.


I can only wear chunky shoes. I need them to balance off the badunkadunk.

that was totally you, wasn't it andygrunthart? i wish i knew what badunadunk meant so i could ascertain whether or not it's a good or bad thing.
by let it ride
no no, let's go nuts!

i think it does sound like a fair idea though, maybe bath, body and skin care could all be one, and all things hair could be another one.

i feel that the stuff about clothes shouldn't be called the fashion thread as fashion is quite a misleading word, it makes it sound like it is all about neon leggings or other rubbish trends!
by lynsosaurus
I got some new shoes! I went to this shop in town that always has a good selection of sale stuff, and I was hoping to get some new trainers of some sort. I picked up a pair of Etnies ones, which are totally not the kind of thing I usually go for at all, but they're really nice.

I can't find the exact ones I got on their website, but they're the same style as these:

but the main part of the shoe is dark brown, and the E on the side is outlined in pink with coloured polka dots inside. The laces are brown but they also came with PINK! laces as well.

And they were reduced from Ãƒâ€šÃ‚Â£50 to Ãƒâ€šÃ‚Â£20. Bargain!
by Sylvie
I've found some really nice shoes, but they're Ãƒâ€šÃ‚Â£110! What do I do? Keep looking around or give in and be naughty?

by lynsosaurus
Those are absolutely gorgeous! Have you already done a thorough trawl of the high street for something similar? I reckon there must be a cheaper version of those somewhere, but if you've already looked in all the usual places, and you really want them... it's worth it, right?
by let it ride
Saz, Monsoon and Accessorize have some similar styles at the moment:

Thee ones I have looked at myself...

If you can bear any of those... they do tend to look quite different in real life, so it is worth to go in and have a look!
by stolenwine

i hate clunky shoes too for the same reason, astrid! i just can't pull them off.

I can only wear chunky shoes. I need them to balance off the badunkadunk.

hey! who edited my post? i'm gonna see if i can edit it back with my MOD POWERS.
by stolenwine

i got some similar to these in italy and i LOVE them. the heel is a bit lower, but i love that style, and i love the patent as well. i went slightly mad and bought some in white as well.
by let it ride
ah yes, patent is awesome. i want like that but lower heels, as you describe! i tried them on but they were just too high.

i have insane amounts of shoes though, i have just realised. about 20 pairs of everyday shoes and boots, and five or six only indoor shoes that are fancier.

but ya, i'm needing to cut back on shoes.
by Sylvie
I went to M&S for some bagels and a vest, but came out with these shoes: 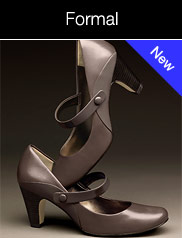 Here's a close up of them, but mine are grey: 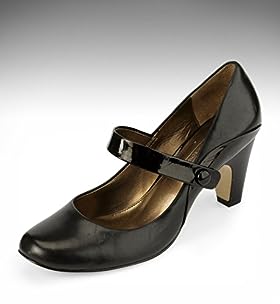 I think they'll look great with black or grey tights. I still quite fancy brogue type ones in black, if I can find some.
by Sylvie
Ahh, I'm having doubts about those shoes now. I think I'd rather spend Ãƒâ€šÃ‚Â£110 on the ones I really like, than keep the M&S ones and never wear them.

I love white shoes, but they only last a few months. It saddens me.
by llamawench
I need shoes in the worst way. Its coming up to summer and my current collection includes 1 pair dunlop volleys, 1 pair traditional runners in bright red, 1 pair black slipons that are exclusively for work and 1 pair black steelcap pull ons. My friend had some lovely little black ballet flat type things today and I tried them on, quite nice. Might have to get a pair. But also need something semi feminine and strappy. Preferably NOT black!
by InMyPlace

by let it ride
purdy! but hard to walk in.
by mutantchoux
Men have shoes too, you know. And chouxs. We don't splash around in puddles in our bare feet all the time, you know.

I want a pair of these:

Without having to be in a motorcycle accident and/or be an unwitting accomplice in the death of Eddie Cochran.
by let it ride
I blame Gilmore Girls, but I totally want a pair of fuzzy-on-the-inside-boots for winter. I have classic basic pairs already, but a pair of flat, warm boots would be amazing. I really like these, they're around Ãƒâ€šÃ‚Â£30 from a shop in Sweden, and of course it's not real fur (or leather) on there.

I can't believe how much I want these. It's been sneaking up on me (is it an old = wanting to be more comfortable thing?) and I have been trying to ignore it but I can't anymore.

For some reason, I have to about 90% stopped caring about what people in general think, but especially so of hipster/trendsters in Stockholm. Bootcut is like a SWEARWORD in Stockholm, haha, so I felt quite rebellious getting a pair of classic jeans. Strange huh?

But back to shoes!

Warming shoes = lovely when it's dark and cold outside.
by roobee

mutantchoux wrote:Men have shoes too, you know. And chouxs. We don't splash around in puddles in our bare feet all the time, you know.

I want a pair of these:

Without having to be in a motorcycle accident and/or be an unwitting accomplice in the death of Eddie Cochran.

Oh! I used to have a pair of those in dark dark green velvet, which sounds nasty, but they were ace. I think I paid a fiver for them in the Schuh sale.

I dropped chewing gum on them, then stuck them in a cupboard where they got a bit mouldy, and finally binned them to much wailing. They were my favourite shoes ever. I never used to know if I looked stupid in them cause I was a girl.
All times are UTC+01:00
Page 1 of 12
Powered by phpBB® Forum Software © phpBB Limited
https://www.phpbb.com/