Let's talk about cricket then as there's a busy winter ahead with lots of series to discuss.

Sri Lanka are currently 96-2 in the first ODI against England, with Panesar not playing for England. An act of total folly in the sub-continent?

South Africa are currently 232-2 in the first test against Pakistan in Karachi, 50s for Gibbs, the impressively-bearded Amla and Kallis.

There was an interesting half a game at Bangalore on Saturday in the first of the 8932 match ODI series between India and Australia, Aus fighting back from 90-odd-4 to post 307-7 thanks to a beautiful hundred from Michael Clarke. Then it rained. A lot.

So yes, cricket. It's good like.
They don't call me Hawkeye Gilhooley... at all
Top

"Spring is in the air, and soon we will again hear that wonderful noise of leather hitting Brian Close" - Eric Morecambe


chris_ps wrote:There was an interesting half a game at Bangalore on Saturday in the first of the 8932 match ODI series between India and Australia, Aus fighting back from 90-odd-4 to post 307-7 thanks to a beautiful hundred from Michael Clarke. Then it rained. A lot.

I didn't know this had started. If it's not on proper telly it's not really happening, or something. I think Pup was due a score.

I see Haddin was playing. Is Gilly sitting this series out?
There ain't no-one gonna turn me round
Top

Haddin played as a specialist batsman, Gilchrist kept wicket and was captain.

Haddin played quite well, I guess he's been unlucky in being around at the same time as Gilchrist so has missed out on a lot of games.

Twenty20 - it's just not cricket, is it? Bunch of sloggers (sorry, "Twenty20 specialists") turning the world's greatest game into a joke if you ask me... What do other people reckon?
Top

I like it, but I just like watching cricket in whatever form it takes. I wouldn't say it's a joke, you have to be innovative with your shots, field placings, bowling etc and you have to think quickly on your feet to succeed, a lot of things that you can take into the 50 over game.

The final of the recent T20 World Cup was a relatively low-scoring game for the format but it can be argued that it was very exciting and that it held your attention for its duration. Not something you can say about every 50 over game. I think test cricket, 50 over cricket and 20 over cricket can co-exist fine though, they all have their own nuances that are particular to their own side of the game and I think they all can be enjoyed for what they are.
They don't call me Hawkeye Gilhooley... at all
Top

I reckon it will improve the English game. It's not all slogging and it brings demands to a team that are relevant to 50o or even test games. If you are stuck in a test match mentality, as I think England are, denegrating the limited overs specialists will lose talent and interest.

Yeah, it's not cricket, village greens, whites. But it's a format Australia and sub-continental sides have embraced (although the weather, rather than English snobbery is a player too). We're still fannying around bathing in the glory of a flukey 2005 Ashes win, focused exclusively on the test game. We really need to realise after the Indian tour here this summer, and the up coming set of ODIs and the obligatory test matches against SI that cricket has moved on. We haven't.

It's no threat really to the purest and bestest form. It's just hugely entertaining to watch (especially compared to the rather dull test game) and is a better spectacle. Unless you're narcoleptic or pissed its impossible to fall asleep at a t20 game

In other news, there was a moment of awesome commentary on Skys coverage of SI vs England yesterday. During a moment of cameraman randomness, he zooms in on a dog.

Sadly I didn't have a clue who was commentating.
Top

Ironically, back in my home village, on the green, they play twenty overs a side wearing their whites... But I get what you mean. If it brings in revenue for the clubs, great. And I guess there are times in longer games when skills honed in Twenty20 become useful. That's a valid point which you've both made. I just don't enjoy watching it for some reason, and I think it is largely down to the fact that slogging is more commonplace - when Botham used to hit sixes in test matches it seemed quite audacious and risky. It's almost tedious watching the runs pile up in Twenty20. Maybe I've been conditioned into liking test cricket.

It's like Johnners for the Loaded generation, isn't it?
Top

I think if anything 20/20 has caught on more in England than Australia. The Aussie players certainly aren't the biggest fans; and as far as the public goes, we tend to think we've got 50/50 down to a fine art and 20/20 cuts into valuable beer drinking time.
There ain't no-one gonna turn me round
Top

I'm right with you. If I want action and speed and thrills and spills, I'll watch something else. That stuff isn't what cricket's for. And other sports will always do it better.
Underachievement as Art
Top

Does anyone know how the Duckworth-Lewis method works? This is my understanding as currently stands

1) Rain stops play
2) Numbery magic with graphs and computers
3) Someone wins
And by me, I mean, Flexo.
Top

well, after a VERY successful tour of pakistan, we are hosting the kiwi's as of today.
i'm kindof excited about it, even though, in classical s.a. cricket cyclical terms, i think we've now done the "flattering" bit... and will no doubt move swiftly along to the "deceive" bit as of this month.

to think, there was a time when i used to be optimistic about s.a. cricket...
Top

2 early wickets, and just now 5 maidens in a row!
Top 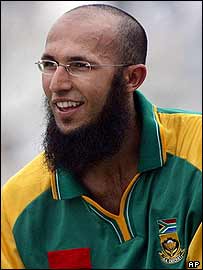 Surely the finest beard in cricket, ever. W.G. who?
There ain't no-one gonna turn me round
Top

i know! it looks like a stick-on, doesn't it?

he seems like a really lovely bloke too - and he's starting to get some runs.
he fields at shortleg - i'm willing to put a fiver on him catching someone out with his beard one day! :)

in other news - i think the rest of the kiwi series is going to be (or at least, should be!) one unremitting slaughter...

last weekend was already our largest-ever runs victory... and now the black caps are without bond (so what's new?) and oram... and there are concerns about fleming too...
Top

Surely the finest beard in cricket, ever. W.G. who? They don't call me Hawkeye Gilhooley... at all
Top

I'd still rate Amla's higher. Unlike Anwar, whose beard, magnificent as it is, has just been let grow of its own accord, not only has Amla shaved his tache, he's also shaved between his lip and his chin. That must take so much concentration, one dodgy nick and he's carved a nice little furrow through a lifetime's work of beard cultivation. Sensational!

In the far less interesting actual cricketing news, I see we're racking up another big score against the Lankans. Jaques and Huss both have hit hundreds in their last two innings.
There ain't no-one gonna turn me round
Top

Superb analysis there from Bill Lawry-roo.

Jaques has fitted in and the transition from Langer has been seamless. He's going to score a stack of runs. I thought Johnson looked impressive in the last test, but he had 550-odd to bowl at so could afford to be attacking.
They don't call me Hawkeye Gilhooley... at all
Top

and it looks like we are going to pulverise the kiwi's again (which is a risky thing to say before we've batted, but still...)

and i think all s.a. cricket fans are sighing a massive sigh of relief at the progress of dale steyn: finally, another strike bowler!
only 24, consistently close to 150kph... and at the moment he's at 65 wickets after 15.5 tests, at an average of under 26.

he and ntini should be lethal together this coming year!
Top

Skys coverage of the SA vs NZ did bring a smile to my face today. When Cummings got one straight in the face, went down bleeding the commentator mused "Oh, noone wants to see that!", the editors clearly did. They subsequently showed it for the next 5minutes from every conceivable angle and in super-slomo.
Top

Time to bump this thread... Adam Gilchrist has announced his retirement from all international cricket

He's said he "just knew" his time was up; but was adamant "there were times when it was hard, but no time when I didn't enjoy the game".

Congratulations to Mr Gilchrist at this emotional time.