the train platform ukuele rapist one

I totally hate the new McDonnalds advert that is for kids 'Happy meals', and has 'Glad All Over' by The Dave Clark Five playing. A ploy to get the kids when they're young, so by the time they're 16 all they want to eat is shite burgers. ...Horrible. I say take the little kiddies to the slaughterhouse, and let them see where their happy meals really come from. Then ask them if they want a f***ing 'Happy meal'
http://raving-pop-blast.bandcamp.com
Top

If I have to see either of those match.com ads again I am going to take a fucking match dot com to the fucking telly dot com.
Is evil just something you are, or something you do?
Top

This was running down the side of the FTSE100 on Yahoo's UK finance pages.

The new Oreo advert really irritates me. Firstly, the girl's voice actually hurts my ears! As a result, I find it hard to tell what she's actually saying, which you'd think is a crucial part of an advert. Secondly, why do they say to twist the Oreo, lick it, put it back together and dunk in milk? I haven't tried it, but I'd imagine it would just crumble and I'm not sure the cream inside is worth all that effort.

It's a shame, as I do quite like Oreos.
Just be nice to me.
Top

Even worse when a customer comes up to the counter and starts talking along with it. I want to strangle them.
five to six, that's what the time is.
Top

Even worse when a customer comes up to the counter and starts talking along with it. I want to strangle them.

I quite like that one, but maybe I haven't heard it as many times as you and I don't have to deal with annoying customers. Admittedly it's the animation I like more than the voices of Brian Blessed and Joe Pasquale - it was made by Aardman and reminds me of Rex the Runt.
Just be nice to me.
Top


Wow! Just seen the new advert for BT infinity in the UK (British Telecom's internet broadband service). Great expusure for DD, The series of ad's features 3 students living in flat together and the problems of all of them trying to use the internet at the same time. There are two lads and one girl and the lads are continually trying to impress the girl- in the latest ad she reveals she is a Duran Duran fan and immediately one of the guys claims to be a big fan too- hence comic scenes of him downloading all the DD albums and claiming to have been at the Arena tour gigs in 1984 even though he's only in his mid twenties.
The ad heavily features the album covers for the first album, Rio and Arena as Hungry Like The Wolf plays in the background. Saw the ad on Sky Sports- but this series of ads have been running on all the major commercial channels.
Quite funny - and for a change factually accurate, great exposure for the band.

This is easily the worst thing I've seen. This man must be destroyed.

a fog of ideas wrote:none of the duran duran fans seem to have picked up that she's a vaccuous ninny...

Vacuous ninny is such a great name for a band.
Top

a layer of chips wrote:This is easily the worst thing I've seen. This man must be destroyed.


Agreed - highly toxic and should be stomped on. EXCEPT - just replay the video, and pause it three seconds in. I defy anyone not to think his expression at that point bears a scary similarity to... 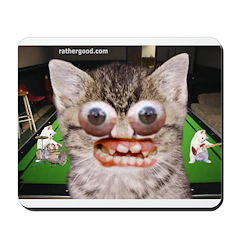 fucking hell! that gave me the heebie jeebies...

I've just seen an advert for a toy dog that poos. It's more than my hungover brain can deal with.
Top